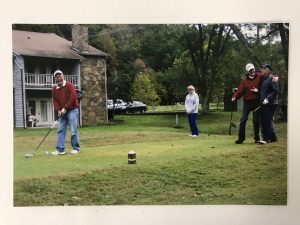 Gene was born and raised in Kentucky and moved to the west side of Cincinnati after meeting his wife. He enjoys hiking, camping and fishing or almost anything outdoors and of course playing golf.

Having four daughters, Gene spends lots of time taking care of projects around their homes. He also coached girl’s basketball and softball at Taylor Creek Youth Organization for six years and two years as Haed of the girl’s basketball program.

Gene’s first real job I worked for a builder in Northern Kentucky by the name of Richard Hosso. He was fifteen so could only work in the summer and on Saturdays during the school year. Gene began working setting forms and pouring foundations, then worked his way up to Carpenter’s helper.

After marrying a lifelong west sider, Gene obtained my Real Estate license and started selling for a company called Real Estate 1200. After about a year and a half, I transferred my license to West Shell Realtors.

While selling for West Shell Gene sold come acreage to Ron Davis Inc. After closing on the property, he went to work for Ron overseeing construction and sales at Taylor Creek Condo’s. With interest rates as high as eighteen percent they closed ninety units their first year! While still working for Ron, Gene started developing and single family homes in Deer Run Country Club Estate.

Gene worked for Ron about twelve years then eventually went out on his own designing and building custom homes. In total Gene comes to us with a little over forty years experience selling and building homes, it’s in my DNA!